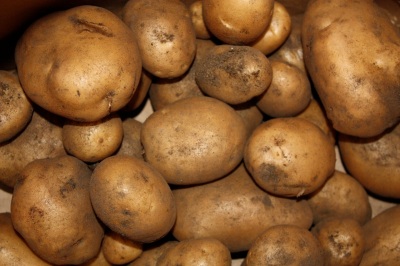 The first olla experiment has come to a close. The potatoes I planted April 16 grew to tremendous heights, then withered, and died. Time to dig.

We discovered 7 pounds of smooth russet potatoes near the original depth of the seed potatoes. So, it was an early setting variety. In contrast, late setting varieties will continue to produce potatoes up the stalk; if you continue to bury the plants, you’ll get more potatoes. For my early setters, the extra mounding probably did more harm than good.

How did the olla perform? When we dug down into the soil, we found an inch of matted roots and damp soil surrounding the olla. Exactly what I wanted to see. On the other hand, the potatoes in the control plot haven’t been watered at all, and they appear to be surviving. The jury is still out. [UPDATE: But not any more!)

The second olla in the bed is surrounded by Red Sangre potatoes. The fronds have collapsed and are beginning to wither. In the control plot (planted May 18), fronds are just beginning to collapse (mind you they’ve never been watered). Does all this collapsing mean they’re finishing their life cycle? Or does it mean they’re dying of thirst? I don’t know. I’m new at this potato gardening, so time will tell. (Resolved here.)

On the right side of the olla you can see the matted roots and soil sheath. To their right is a buried potato next to the remains of its plant stalk. 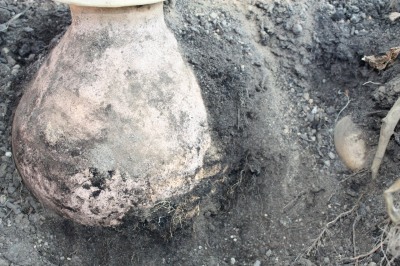 This entry was posted in olla irrigation. Bookmark the permalink.