Cleaning out the Combs 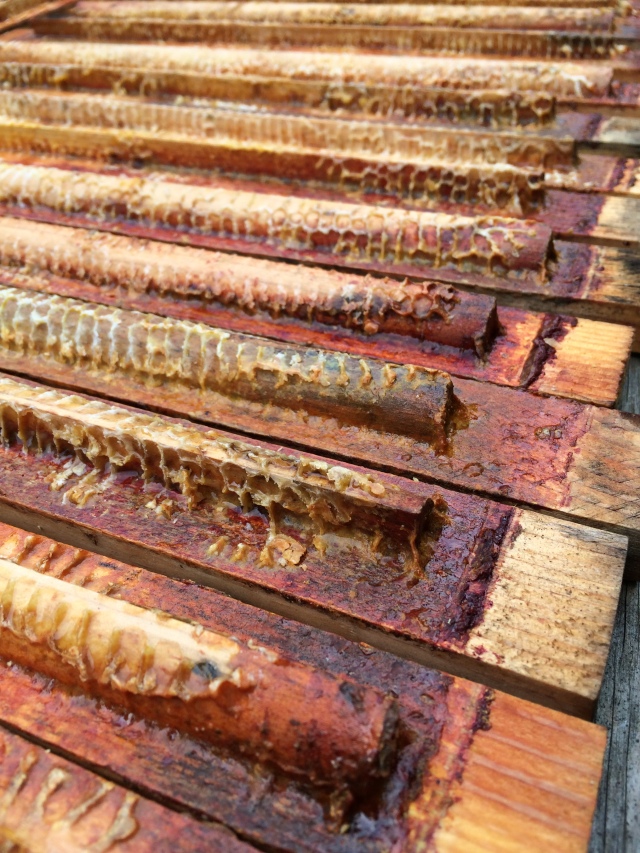 In November, we harvested the full honey combs from the hive that died of exposure during a bad fall storm. It was our first experience extracting honey – and from a top bar hive at that.  In all, we crushed and jarred 3 1/2 quarts of honey.

I may not have reported the disappointing news that – for whatever reason – our feral hive also died before winter was through.  This meant we had one hive full of honey and the other with a number of partial combs.

This April, in preparation for swarms (which did not arrive) and purchased bees (which I did not collect), I cleaned out both hives.  It was several days of intense labor, including cutting the combs from the top bars, breaking off and sorting empty comb and broody comb, then the actual honey extraction.

Combs from the top bar hive in various stages of dismantle

For cutting and sorting comb, I had a huge number of bins and bowls on hand.  Empty comb went into one bin for later melting. Broody comb or mixed brood-honey comb went into another bin for what-the-heck-exactly-will-I-do-with-this-mess.  And honey comb went into all of the large bowls I own and then those neighbour Alicia brought over after I had run out.

To be clear – if you are not familiar with honeybees, most combs are not one type or another.  Rather, combs of mostly brood start with honey (with which they nurse the young bees), honey and pollen can be on the same comb, and empty comb can be empty of honey or of emerged beelets, or partially full of either.  So the cutting and sorting also involved a lot of breaking of the comb to sort these sub-types.

At some point late in the day, my forearms failing from holding the bars at just the right angle to cut off the heavy honey-rich comb, I invited Alicia and her twin girls over to check out the process.  I’m glad I did because the girls were very curious and they love honey.  They tried honey from different combs, and were brave enough even to chew some whole comb. 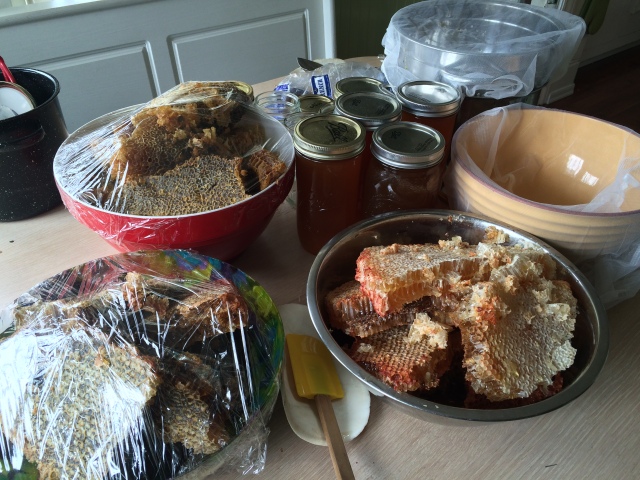 At the end of that long day, I started crushing honey from comb – covering the rest of the heaping bowls with saran wrap.  I was able to get two crushes draining at a time – but even then it took days to process all of the honey.  What was fun about this crush – besides the sheer volume – were the differences among the honey and the combs. Some honey was a bright clear yellow, other a deep amber.  And the combs varied from off-white, sometimes ringed with red propolis, to brittle yellow, to dark iridescent black.

Quarts of variously-coloured honey from the salvage harvest of 2016

It was amazing how much honey those two hives held.  The April crushing yielded 11 quarts of honey.  Add to that the November crushing and we had nearly 15 quarts of raw honey.  After 3 years of keeping honeybees and never harvesting honey, I don’t even feel bad about the loss this winter.  We have their sweet memories to tide us through until our next opportunity to keep bees.

I keep records.  Of all sorts of things.  The goings-on in the garden is just one of them.

Harvesting garlic is an garden highlight, so it usually gets recorded.

This year is the earliest I have ever harvested garlic here in Seattle.  How early was it?

This year’s harvest was on June 3.  That is two weeks earlier than the next closest date (incidentally, last year).

Much more impressively, this year’s harvest was SIX WEEKS earlier than the median date that I have harvested garlic over the past 16 years!

Is this climate change? 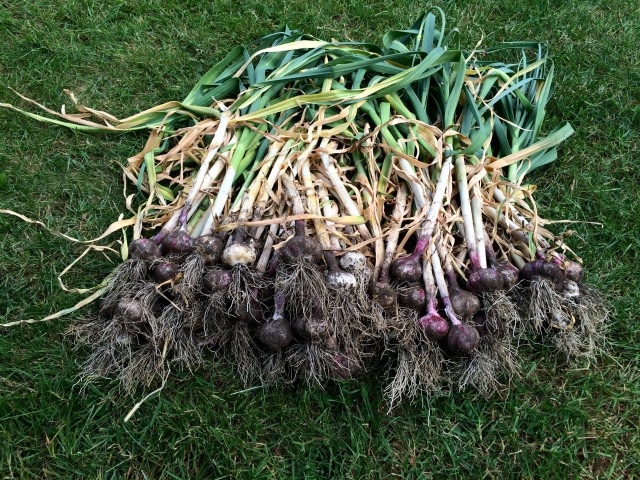 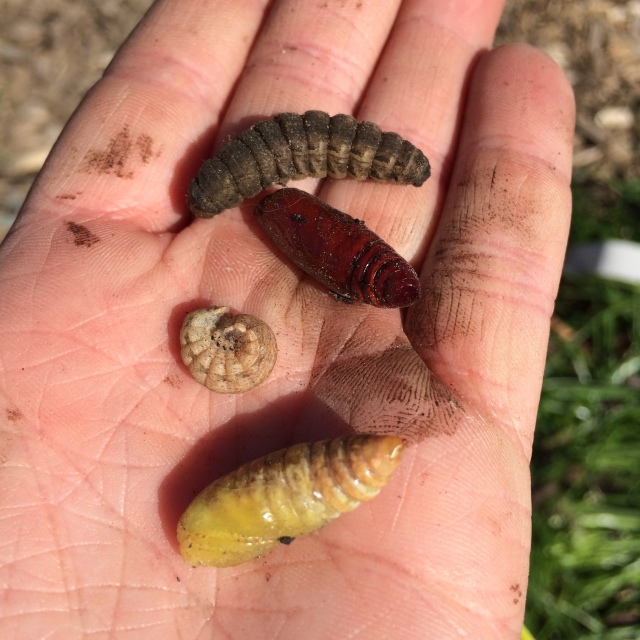 Happy happy day for the hens.

Is there a professional or amateur entomologist out there who can help me identify these guys?  What do they eat? What do they become?

If you’ve been following this blog you may have noticed my struggle with soil fertility.  The first few years of the garden were prolific.  I started with a yard that had been growing grass quite successfully for untold number of years.  I composted/removed the sod and mixed in topsoil and compost. In the intervening years I have amended my soil with cover crops, homegrown compost, commercial compost, and feather meal.

Most gardening books say to generously apply compost, amend pH, and all will be well. Still, most of my plants have shown a gradual decline in size and productivity over the years.

This winter, a climbing buddy reminded me of Steve Solomon and his book Growing Vegetables West of the Cascades. VERY IMPORTANTLY, Steve writes about the special challenges our soils face for growing veggies.  In general, our native soils are impoverished in P, leached of Ca by our abundant winter rainfall, but high in K. My own soil tests have repeatedly shown low N, high P, and very high K with a moderate pH.  These home tests do not measure other important nutrients like Ca, Mg, or the even more ‘trace’ essentials like S, Fe, Cu, Zn, Mn, B.

So this year I am trying Steve Solomon’s ‘Complete Organic Fertilizer’ (COF). Variations allow for adding different elements from different sources, but here is what I did (per 100 sqft):

Hopefully this combo, with some home compost, will do the trick! I am putting in a full batch of COF prior to planting, adding a small amount in transplant holes, and will side-dress hungry crops through the season.