If you saw my straggly starts, you would know it is past time to plant these babies outdoors. But it has been chilly, so I’ve been holding off. Yesterday I decided ‘basta’ and gave it a go.

I had one olla ready to plant so I decided to try it with cucumbers in my raised boxes. I dug the olla in to ground-level, patted the soil around it, filled it to the brim, and capped it. 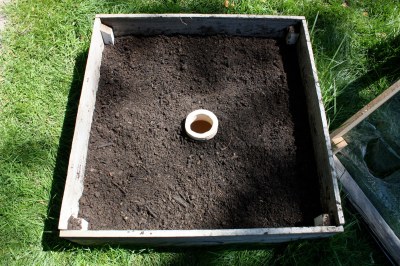 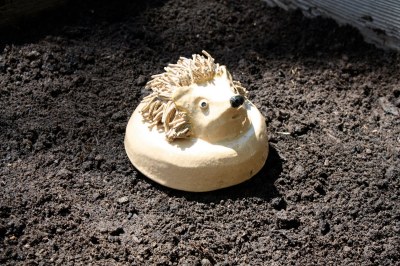 I set the plants about 4″ from the edge of the pot (at its fullest). This year I am growing again the Mid-East Prolific (Seeds of Change 2009) and Marketmore, an organic new variety from Territorial Seed Co (2010). I originally planted 2 seeds per newspaper pot and haven’t yet had the heart to cut one out. I will wait to see who gets better established outdoors.

I am using for trellising some steel grids donated by our neighbours Mari and Andrew. They are set in the box and tied at the top. I have one facing east and one facing west. Hopefully the plants will distribute themselves for morning and afternoon sun. Vemos.

Finally, because it is still cool and because these wee plants are not used to full-strength sunshine, I covered the whole thing in GrowGuard, a floating row cover that lets in rain and holds in heat while softening direct sunlight. This doubles as chicken protection for the time being. 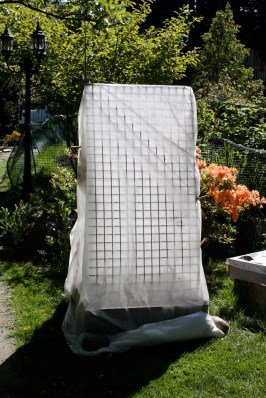 This morning water level in the olla had dropped 1.5″, probably just soaking the pot. It was toasty warm inside the tent and the plants looked like they’d weathered yesterday’s afternoon sun and the cool night (43F/6C) just fine. 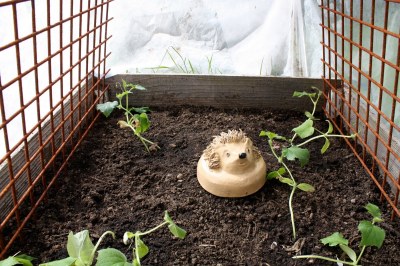 This entry was posted in chickens, cucumber. Bookmark the permalink.