The Value of Making Dish Soap

Tonight I was thinking about value. We make money to pay people to make things for us; food, soap, goods. Most of us don’t have time to make things for ourselves. But the truth is that we choose not to. Division of duties can be good; I’m not very interested in making my own bicycle, nor do I think I’d be very good at it. Sometimes it is much better to pay someone skilled to make something for you. But often I’m paying for something that’s not even what I want; pesticide-laden food, endocrine-laden shampoo, PBDE-laden bedding and clothes.

I’ve been trying out dish soaps at my local grocery store, looking for one that meets my exacting environmental standards. I’ve been disappointed. They are either full of cruddy stuff or they are super expensive.

Thank goodness there are alternatives. They can be bought, usually for quite a bit more $. And I think it’s worth it, if you have the $ to spare. But I don’t (yet). And I like to know how things work, so I often want to try making it myself first. Sometimes I just try it once (paper) and am satisfied. Sometimes it sticks and I’m hooked (food).

My friend Erin taught me to make soap a couple of years ago. Since then I’ve stuck straight and narrow to a few simple recipes. The stars were finally aligned to break out of the mold (ha ha) and try something different.

In January, I made a batch of very basic soap with a mind to reprocess it into a harder soap – something I’ve never done before. Another thing you can do with basic soap, or a batch that doesn’t turn out very well, is to melt it down and use it for other things such as laundry or dish soap.

Last night I made a double batch following this recipe: 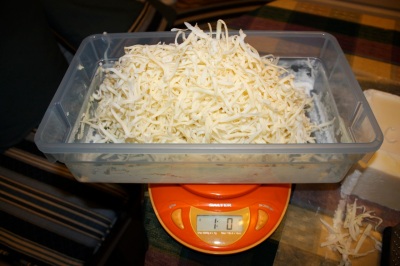 It took a while for the last bits of soap to melt, but all-in-all it was pretty darn simple. I poured the whole fragrant mixture into a used gallon soap container they let me bring home from PCC.

I ended up making a double recipe and using just over half of my soap block. It’s enough to nearly fill the gallon jug. My last little bottle of dish soap cost about $5. Roughly 50 cents per ounce. What I just made cost more like 5 cents/oz. Adding to that ‘value’, I didn’t have to buy another plastic bottle, I have enough to last months, and the simple ingredients means I’m reducing the chemical miasma reaching Puget Sound.

I think this DIY is a keeper. 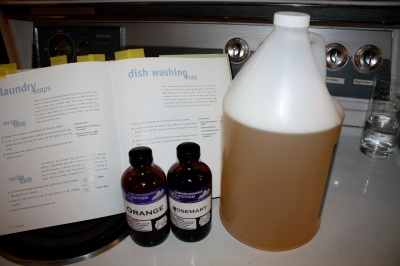 UPDATE: The following morning I found my soap all gloppy and clumpy in the bottle. I did a little research and found I probably didn’t mix it well enough. Last night I let the soap melt on low for about 45min, but didn’t stir much. And you can see from the picture above that it wasn’t actually clear, just translucent.

Here it was in the morning:

I put the heat back on, covered it, and left it for several hours. To be safe I also used my immersion blender to make sure everything was good and mixed. Now that is clear!

However, next morning, I find gelatin in my soap bottle. It is now uniformly gelatinous, but gelatinous nonetheless. Too little water? How do I keep it in liquid form? I’ll have to do some more research.

UPDATE: After re-heating and diluting the soap 3-fold, it turns out making soap this way does not produce your typical store-bought liquid soap. It produces soap snot. I just had to come up with the right search term (i.e., including the word ‘snot’), and there I found my answer in the form of many sites referring to the snot-like consistency of rebatched liquid soap. To be fair, my recipe book did not tell me what the soap would be like, just that it would be liquid. Great. It’s a bit disgusting to use, but it’s soap, it works, and I have a lot of it. Next time I’ll use a different recipe.

This entry was posted in DIY, homemade soap, household cleaner. Bookmark the permalink.