The view through the observation windows on our top bar hives isn’t perfect. The combs are, after all, covered in bees (nearly a ‘couch‘, to be precise). Nonetheless, I could see a piece of the pattern that did not fit. I could make out what appeared to be a bit of comb, lying on the bottom of the hive.

So we put on our bee garb and went in. There was in fact a piece of broken comb lying on its side on the bottom. In the process of accessing this piece, two combs broke off. Not at the top bar, but partway down. Most of the comb was very soft. The largest was also very heavy with capped and nearly hatched brood. Very sad. 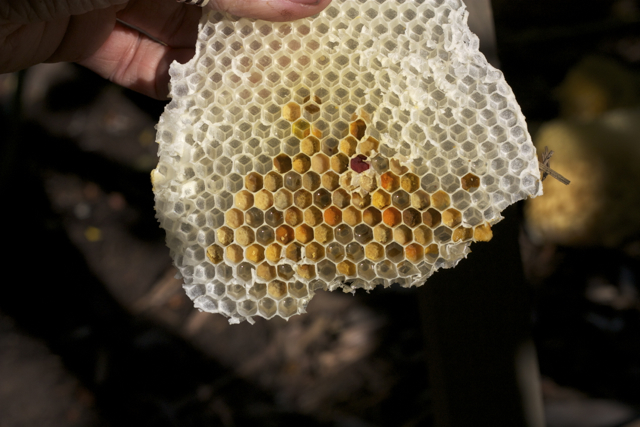 Pollen and honey in this broken comb

I laid the broken combs outside the hive below the entrance. Hundreds of bees covered the broken comb. Later it occurred to me that the queen might be in there with them. Uh-oh. This time ungarbed, I gently lifted the combs until, yes, there she was – the large bee with the big red paint dot. I took the lid off, lifted that piece of comb up, pried open the nearest top bars, and did manage to shake the queen into the hive. The rest of the bees migrated back to the hive by dusk.

What a setback for these bees! How do we prevent this from happening again?

This entry was posted in bees, top bar hive. Bookmark the permalink.