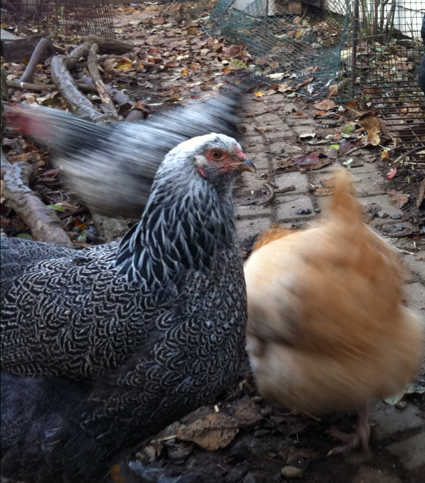 My young hen Calamity Jane sits in the nest box.  She has done very little else for weeks now.  She spends the day in there when the other chickens are out having dirt baths and fighting over the compost pile.  She spends the night in there when the other chickens are sleeping on the roost.  She makes distraught cluck-cluck-cluck sounds when we force her off the nest.  There is no doubt about it – she is broody.

Broodiness is the state of a hen who is attempting to hatch a clutch of eggs.  In a reproductively mature hen, lengthening day can trigger the biochemical changes that lead to broodiness.  So, although chicks can be hatched anytime during the year, nature has arranged the willingness to sit on eggs for 20-odd days to coincide with spring, when the most food would be available to fuzzballs.

When I first realized she was broody, I tried to stop it.  I isolated her – preventing her from accessing the nest box.  I also dunked her in cold water (to lower her body temperature, which elevates in broodiness).  Not only was my bucket a little small (she stoically stood on the bottom while I held her), she was too far gone.  Once the brooding hormones are in full-swing, there is no going back.

Backyard hens don’t all go broody in the spring.  Some can go broody at other times of the year.  And in many the urge is simply never triggered.  I have nothing against natural urges to procreate.  Unfortunately, our hen’s eggs were never going to hatch because we don’t have a rooster to fertilize them.  And a broody hen no longer lays eggs.  As much as we like our fowl, the biggest reason we have chickens is for the eggs.  I don’t mind if one doesn’t carry  her weight for a while – it happens when the hens moult – but, extended broodiness can also kill a hen if she neglects food and water for long enough. 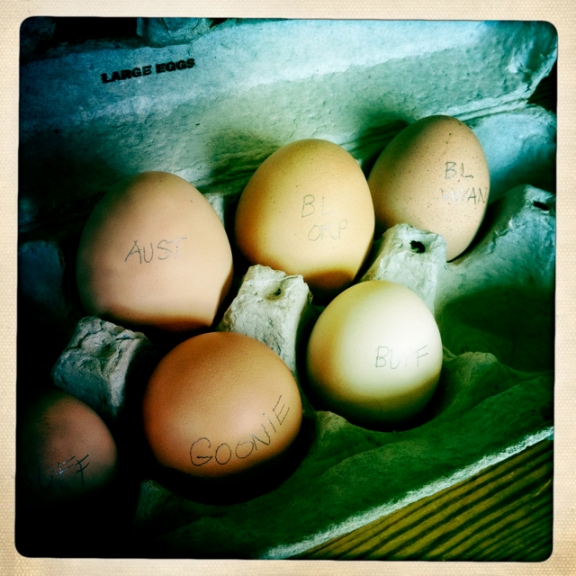 Rather than wait to see if she eventually came out of her broodiness, I decided to try letting her hatch some eggs.  If it wasn’t already too late.  There are good signs that she is keeping up her strength; occasionally she stumbles out of the coop of her own free will.  She seeks water.  She scratches pathetically at things that won’t yield food (but I know she has access to feed in the coop).  She drops enormous (I mean ENORMOUS) turds.  She pecks at other chickens like they did something to offend her.  And then she heads back in, uttering that particular cluck-cluck-cluck-cluck under her breath. 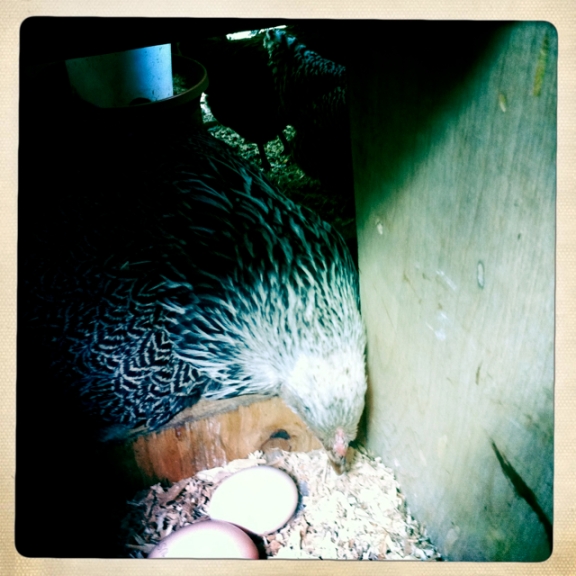 Through the Seattle Farm Co-op listserv, I found a neighbour willing to barter fertile eggs for soap.  I forced CJ off the nest to place the eggs in her brooding spot.  The other chickens were drawn to the coop by my presence and I got to see a fascinating display as CJ defended her nest: growling, bowing low to the ground, spreading her wing and tail feathers, she made a shield that the other chickens decided wasn’t worth investigating further. 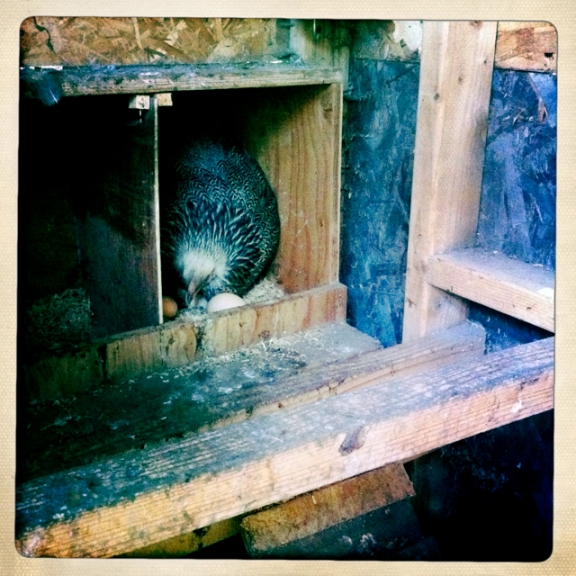 Rearranging the eggs for incubation

CJ inspected the eggs, found them to her liking, and moved back in the box, re-arranging eggs and settling in.  I only hope she can keep it up until the hatch so that she can recover her chicken life! 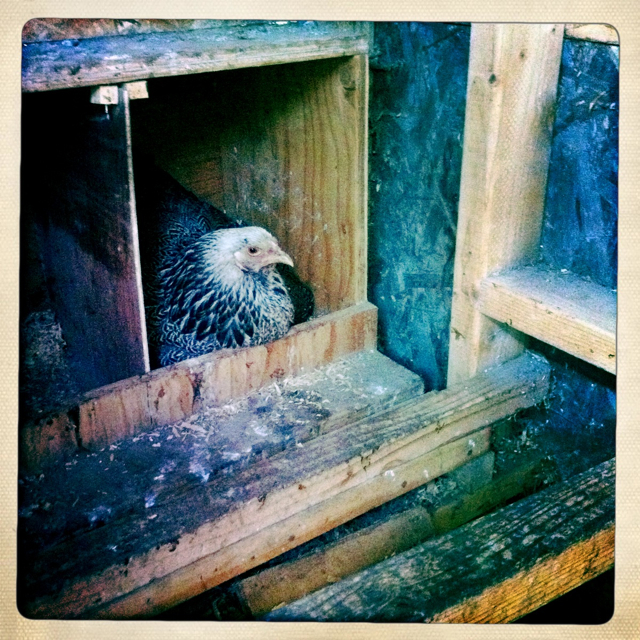 Sitting on eggs - at last

The sad next event