Baracka Figures It Out 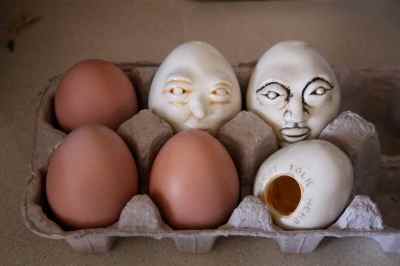 After discovering the eggs under the porch last week, I feverishly read BackYardChickens for advice about how to get our chicken to lay her eggs in the nest box. First I thought: I built the boxes wrong. So I read a hundred posts on nest boxes and no two were alike (ground-level vs. raised; dim vs. bright; indoor vs. out; roost vs. ramp; from dresser drawers or milk crates lying on the ground to fancy colourful built-ins up next to a roost).

Basically, people felt that chickens will lay anywhere – that they feel like. In general they’re looking for somewhere safe and secluded. Like, say, under the front steps where you spend a lot of time with your pals. Well, we’d made that dark corner unavailable to them, but our yard is full of many dim cozy nesty spots.

Many people wrote that the only way to get your chicken to lay in the coop (if not the nest box) is to lock them in. Cruel? Perhaps. JennsPeeps wrote: “It’s soooooo hard to deny them when they’re pacing and running their beaks along the wire like little prisoners with tin cups.”

And that’s how it was. I locked the chickens in the coop/run for 1.5 days until Baracka laid another egg. They weren’t happy about it. On the second day I peeked into the coop at 11am and saw an egg deposited beside the ramp up to the nest boxes. I hoped that was enough and released my prisoners.

Next day is Saturday and when I check there is a beautiful clean egg in the middle of a nest box! Yay! Sunday we are reclined in the yard recovering from Scott’s birthday party when we realize Baracka isn’t with the other girls out in the yard. I peek in and she’s sitting in a nest! Half an hour later a triumphant crow announces the arrival, then she runs out to her flock and it’s grass, bugs, and dust baths the rest of the afternoon.

Monday I worked outside so I could keep an eye on them. I had the growing realization that eggs 6 days a week meant, not that some days she doesn’t feel like it, but that her egg cycle is longer than 24h. 11am on Saturday, 1:30pm on Sunday, I was guessing another egg would be laid later Monday afternoon. But where?? I was looking for solitary behaviour. Starting about 2:30 Baracka begins wandering off on her own. I was on to her. She poked around some bushes next to the coop, a small overhang by the house, and repeated visits to the coop and the now-blocked-off crawlspace under the front steps. Eventually she settled on the coop – disappearing for half an hour and laying an egg about 3:30. Yay!!

Now for the two late bloomers…

This entry was posted in chickens, eggs, nest boxes. Bookmark the permalink.

5 Responses to Baracka Figures It Out