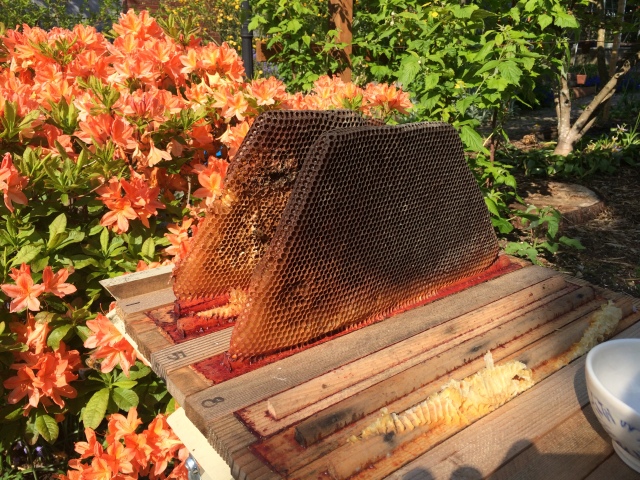 Old combs will be recycled

After the swarm moved into the hive we had ready for the new packaged bees, I had one day to scrounge a suitable replacement.  Luckily we had the empty hive from the first die-off in 2014.  But it needed some love.

We decided to let them start from scratch, so we removed and scraped off all of the honeycomb from the top bars, scraped wax attachments from the sides and windows, and removed all of the debris.  The viewing windows were a foggy, waxy, propolisy mess.  I was concerned about what kind of solvent I would have to use, but it turns out that vegetable oil will dissolve beeswax and propolis!

After replacing all of the top bars, I leveled the hive so the new combs might be straight, made up a 1:1 sugar water solution, and we were ready for the new bees! 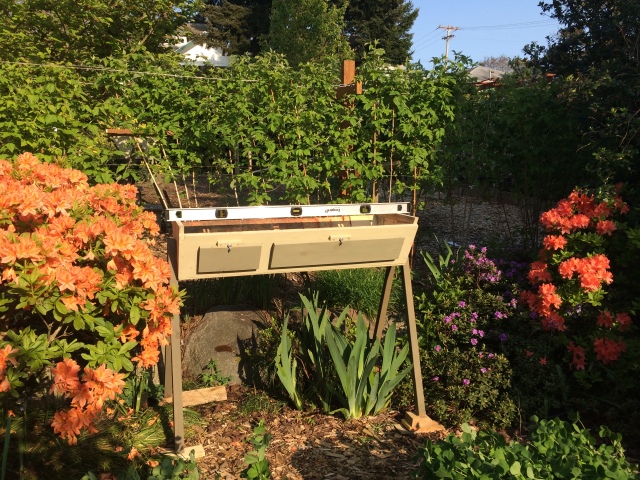 I met Northwest Bee Supply at the designated pickup location in Seattle. An interesting scene: bees filled the morning air, a long line of beeks meandered through the chilly parking lot, waiting to pickup packages and supplies. We chatted about bee die-offs and mite management techniques as bees randomly landed on us then flew off again. Some people started when a bee landed on them – shook them off, others let them come and go. The bees arrived in a plastic Bee Bus instead of the usual mesh-covered wooden box. Thousands of little legs pushing through the openings reminding me of PETA propaganda for animals being brought to slaughter.

But these bees were (hopefully!) not headed for slaughter. Back home we sprayed the Bus with sugar water so the bees had something to do. Geared up, we opened our top bar hive by removing the top bars towards the back, installed a pollen patty and the quart of sugar water, and replaced the top bars.

Now for the bees. First thing is to remove the Queen. We shook down the bees by solidly tapping the Bus on the ground, lifted out the syrup can, and removed the queen cage. The Queen paced her small wooden cell with its mesh-lined window. Queen alive and well – check.

Straggler honeybees on top of the bars after hive installation

Next we removed the top bars from the front of the hive, pried open the end of the Bus, poured and tapped 10,000 bees into the open trough of our top bar hive. This is not as easy as it sounds. And it is loud! Each firm tap to release more bees was accompanied by the angry buzzing of one thousand wings. 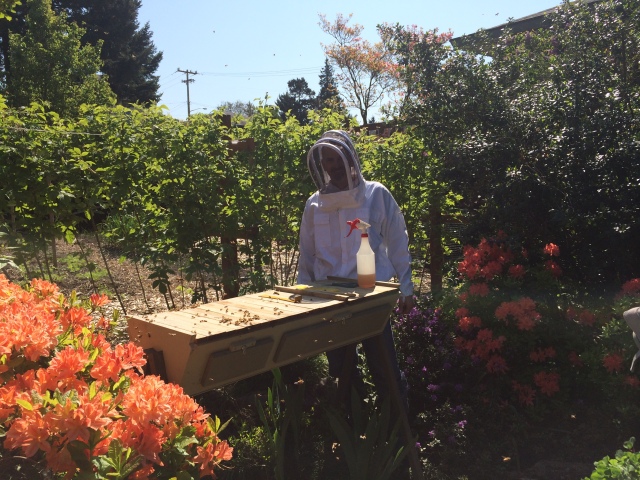 The last step was to secure the queen cage. In a top bar hive, you do this by pinching the metal tail of the cage over a bar so that the cage hangs down into the hive. At this point, the young worker bees have been with their Queen less than 24 h. They do not know Her. If she were set free from her cage, they would kill her for an intruder. So we wait for her pheromones to lull them into compliance. They will feed her through the bars of her cage. When we change the cork plug out for a marshmallow 4 days later, they will chew through the plug and set her free to reign their hive. 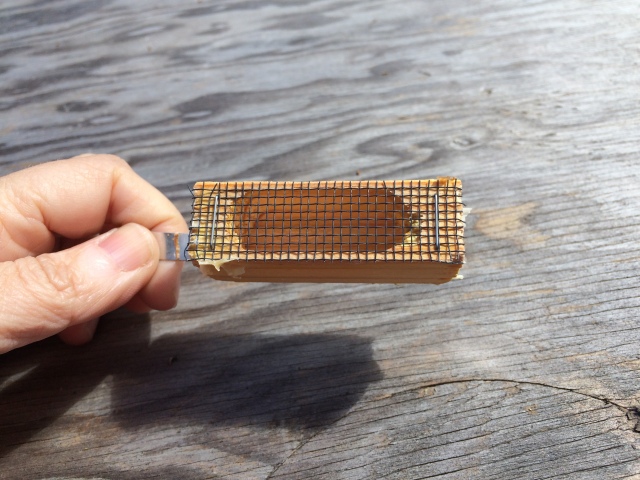 One week later, the queen cage is empty and they have drawn out nearly 3 full combs. Game on!

4 Responses to Bringing Home the Bees