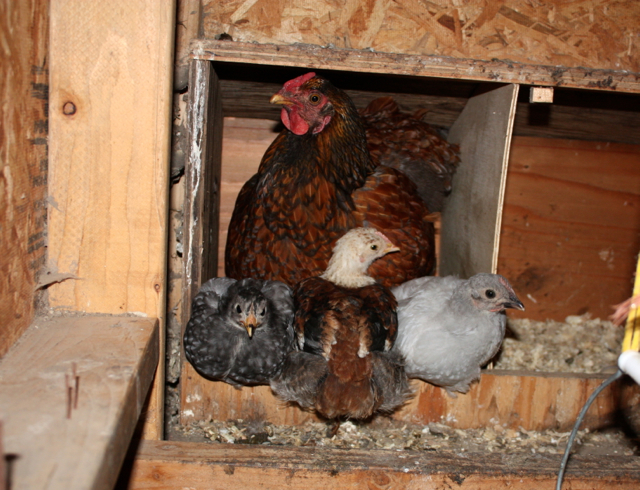 Calamity Jane was a good momma hen. She taught, she warmed, she protected. And she had a re-integration plan. At week 1 CJ moved the family from the broody box to a nest box in the coop. At week 3 she moved the family to the lower perch to sleep, and at week 4 she was done with them.

Little Sister is more of a helicopter momma hen. At Week 6 she still finds choice morsels of food for her chicks, she still gets mad if you get too close to them, and she still tries to sleep with them in the nest box.

Although I am curious how long this will last, it is time to intervene. The box where they sleep is a poopy mess. And with CJ still brooding 24/7 in the third nest box (yes, *again*), one egg-laying nest does not hold the interest of our most fickle hen Baracka. Yesterday we discovered her secret egg nest. With only two laying hens right now, secret nests are particularly unappealing.

So I have cleaned the poopy nest box and locked Baracka in the coop so she can get over her furtive laying trysts. And tonight I will bar entry to the nest boxes, forcing Little Sister and her brood to seek higher ground – hopefully on the roosts.

Studying animal behaviour for a living and a hobby, I surprise myself by still learning very very basic things. For example, the range of behviours among individuals of a species. We know that humans are not all the same. Some like to be active, some like to sit on couches for hours on end doing very little. Some are very vocal and socially engaged, while others are quiet and shy. Some are very engaged parents, others have little interest in their offspring, or choose to forgo reproducing at all. For some reason, we expect other animals to not have complex and variable behaviours. We expect that fish are fish are fish, and chickens are chickens are chickens. Outside of dogs and cats, we expect other animals to have no personalities and to respond singularly to stresses. And yet the truth is that they are much more like us than like small clones of each other.

UPDATE: The next night I found LS sleeping in the next nest box over from her chicks. In the yard I saw her peck at one. Later that day, she layed an egg. The next night she was up on the roost and the chicks were on their own. Ha!