There are many good reasons for cities to allow chicken husbandry, including autonomous food production, fostering better connections to our food supply, and because they are relatively very tolerable pets.

Chickens have been legal pets in Seattle for more than a decade. In 2010, the city of Seattle voted to raise the chicken limit from 3 to 8 per household as part of their urban agriculture initiative. Although I was disappointed that roosters were now officially banned in the new initiative, I am pleased the City is taking more seriously local, sustainable food movements.

I admire small businesses that are born from insight into a local need. The introduction and subsequent rise in popularity of raising urban chickens has led to many such businesses. It used to be that backyard chickens were all DIY. This worked well for those of us both handy and innovative. But many potential chicken owners were deterred by the DIY aspect – starting with ‘How am I going to build a coop?’. 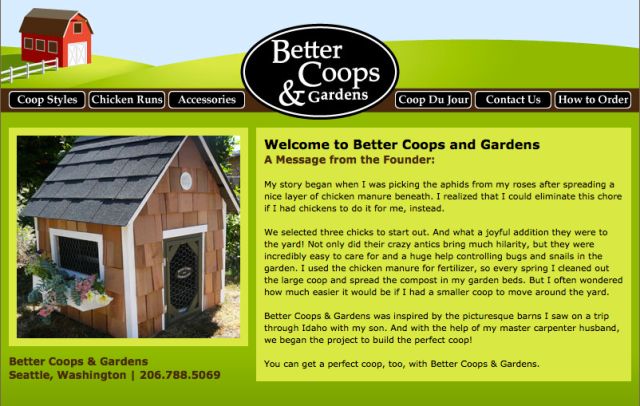 Mainstay Coops, which hand builds elegant subtle A-frame coops
Saltbox Coops – one design was so popular that it is exclusively available now through Williams-Sonoma Agrarian
Kippen House became so popular for their modern coops that they have published a book of design plans and are no longer taking orders!

The next small business to appear was chicken sitting!

The latest small business to service Seattle’s urban chicken owners is a contract service that will clean your chicken coop. The cleverly-named ‘ReCoop‘ has a tagline that says it all: “Foul Management System”! Cleaning your coop, yard, and roosts can’t be a fun job, but with the extra tag “We’re here for the poop”, you can bet they will make good use of the ‘waste’ by composting it for re-sale. 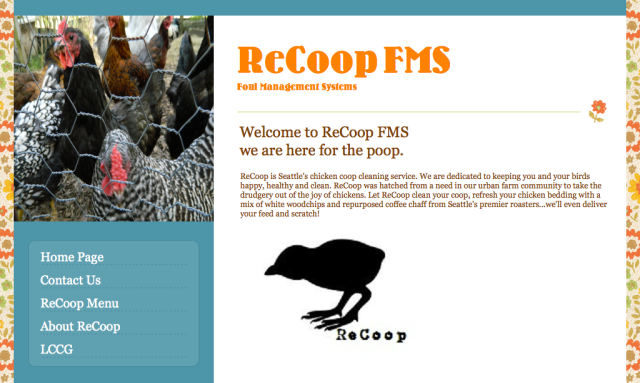 1 Response to Urban chickens a boon to small business development