The new Roo in town

The only rooster left in our chicken yard is made of plastic. Although not dynamic (except when he falls over in the wind), there won’t be any crowing to wake our neighbours, and we have two less mouths to feed. 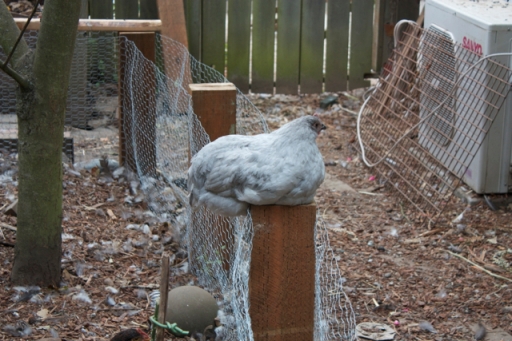 Last week as the chickens crowded around the snack I brought out, it finally occurred to me: this is too many chickens. Roo roo was destroying the garden with his daily escape-ades, George (originally ‘L’) just sat around placidly eating and growing, and the seven hens fought with them (and each other) over everything from sunny spaces to sleeping roosts. 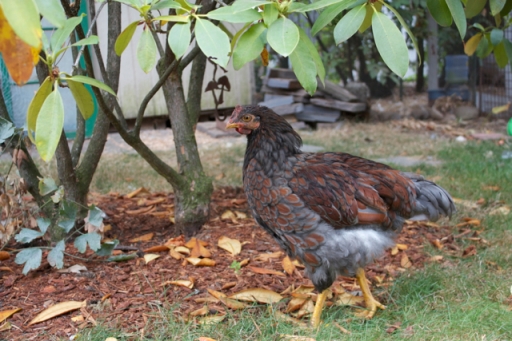 I put a post on Craigslist advertizing our lovely roosters, replete with photos, highlighting their personalities and best features (Rooroo is a good bug catcher, George likes to be petted). I got several inquiries. Some began ‘Dear Sir, You have rooster? I come get. Zhou.’ Implied was the subtext: I happy to eat you rooster.

But I wanted them to go to a nice home, not the pot. I returned messages, leaving the Zhous and the Juans until last, but ended up calling even them. No one got back to me. Craigslisters can be flaky.

After the lack of serious inquiry, I got to thinking – I should eat them myself. I pulled out my homesteader manuals, reviewing the best methods for cleaning and butchering, then asked Scott if he would help me. Emphatically not interested. To be fair, we have butchered chickens before at my co-worker Tiffany’s urban farm. It was arduous and tedious. Understandably he felt satisfied with his experience.

Without enthusiasm from my partner, I wasn’t as interested in taking down the roosters, even with a friend’s help. It would be a lot of work for little gain. Better I find them a home or a pot elsewhere.

So I reposted an ad on Craigslist. This time I wasn’t so particular. And I just advertized Rooroo, thinking I would keep George the Gentle Giant as long as possible (he was SO pretty and I wanted to hear his crow). Zhou #2 definitely wanted to eat my cockerel. Fine. I left him a message.

Soon after, I heard from a Mrs. Rabbit who thought Rooroo was just beautiful. The Rabbits (hee hee) live on a farmlet outside of Seattle, have a large flock of hens, and were in need of some roos. Mr. Rabbit happened to be in town. I frantically called Scott – please – has an Asian man come by for Rooroo? No? Great! Mr. Rabbit and Scott packaged up both roosters for their new home.

I sent Mrs. Rabbit an email directing her to my blog and hinting that I would love continued correspondence to hear how my roosters turn out, but nary a peep from her 😦  I miss George’s sedentary humour and Rooroo’s antics, but things are a bit more manageable and I was finally able to sow my winter cover crop.

Raising these chickens was a great experience, but letting them go can be hard. If we can’t get our hens to start laying again, we may have to get a whole new crop come spring…

This entry was posted in baby chickens, chickens and tagged craigslist, roosters. Bookmark the permalink.

2 Responses to The Last Roo Standing