My tia Connie made a homemade ham bone & split pea soup last winter. I didn’t think I liked split pea soup. I was wrong. Ever since then, I have been wanting to try making a hambone-based soup.  Last week biking by The Swinery in West Seattle, it occured to me to stop and pick up something ‘ham’. That something turned out to be a ham hock. 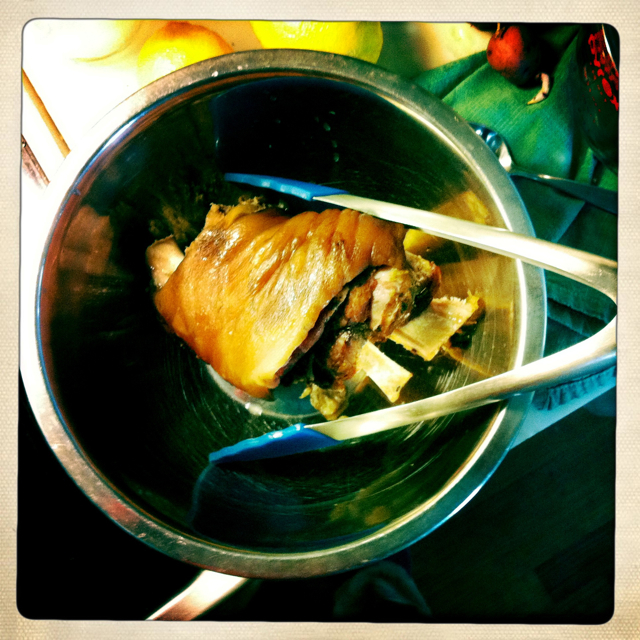 Ham hocks are weird.  And kinda gross.  You definitely realize you are using some part of an animal.  As obvious as that sounds, I think in our modern day supermarket culture it is not a common experience.

I also wanted to use some of my homegrown soup beans.  I have already tried my Tiger’s Eye beans, so I decided to use the Yin-Yang, or Orca, bean, which is a kind of calypso bean.

Here is what I did:

Wow!  We decided this meal is a real winner.  The photo didn’t turn out (I only took one was cause I was anxious to eat it!), so you’ll have to take my word for it. The flavours were very simple, but very tasty. You could do a lot with this dish (herbs such as thyme, cream near end and a splash of balsamic, more veggies…)

Of course, a loaf of homemade no-knead bread perfectly complemented the soup.  This loaf is very similar to the one described here, but the flour was 1:1:11 rye flour, whole wheat, and AP, aged 1 week in the fridge, and sooo tasty.

BTW: The title of this post is a line from a poem.  I will be very impressed if anyone but my sister tells me they know it!

This entry was posted in beans, cooking, food, winter. Bookmark the permalink.

4 Responses to A Big Ham Bone is Surely Sweet