Posted on December 2, 2008 by jkmcintyre 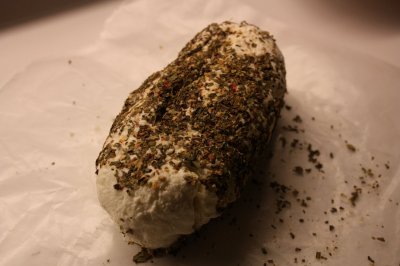 All this time I’ve spent trying to perfect mozzarella (which turns out about 50% of the time) and I’d never tried the much easier goat cheese!! I bought 1 QT of pasteurized goat milk at Trader Joe’s and finally decided to try making Chevre. Turns out it’s dead easy.

I put a stainless steel saucepan inside a larger pot (resting on a few rocks) filled with water and warmed the milk to 86 F. I had ordered ‘Chevre starter packs’ from the New England Cheesemaking Supply Company (no, there is no closer source!). These include malto dextrin, mixed culture, and rennett. I subdivided the package into 4 since I was making 1/4 gallon and sprinkled in the powdered mixture at 86F. I mixed the milk well with a spoon then covered the pot.

The recipe now calls for leaving the milk at room temperature (not less than 72F) for 12-16 hours. My house not being this warm even during the day, I decided to try the simple wool box approach I’d read about in H.C. Flores’ Food Not Lawns. Well, I didn’t have a box, so I wrapped the pots in my grandma’s wool shawl, covered the whole thing with a towel, and went to bed.

Today after ~15h I checked the milk to see if the curd had formed. I tilted the pot a bit so the whey moved aside and revealed a nice curd that pulled away from the pot edge and gave a bit under my finger. Cool.

I cut the curds into 1″ columns then gently poured the whole thing into a colander lined with butter muslin. The butter muslin might have been overkill – cheese cloth may have sufficed. I wrapped the muslin around the handle of a wooden spoon so the curds hung and the whey dripped. After 6 hours I checked again and, drip-free, I had chevre! I put the cheese into a glass container and into the fridge. It even smells like goat cheese!!

Tres, tres simple. Later we made pizza with it and it was delicious. 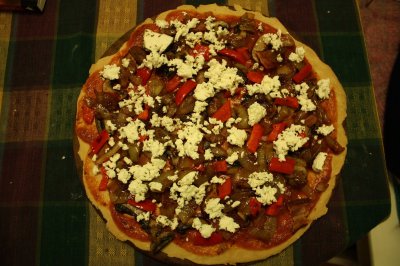 This entry was posted in cooking, DIY, homemade cheese. Bookmark the permalink.